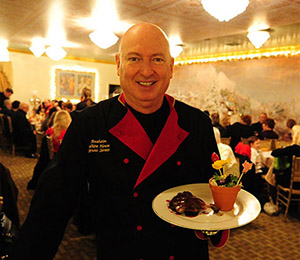 Sir Bruno Serato arrived in the U.S. from his native Italy speaking no English with only $200 in his pocket. Through hard work and determination, he worked his way up from busboy to owner of the critically acclaimed Anaheim White House restaurant, whose patrons include U.S. Presidents, sports stars and celebrities. 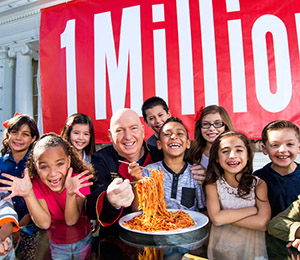 But it’s his work with children that has earned him an international reputation. Serato launched the nonprofit in 2005 after he and his mother, Caterina, visited a local Boys and Girls Club. There, they saw a 7-year-old boy eating a bag of potato chips and when she learned that the snack was all he had for dinner, she instructed her son to head back to the restaurant and feed the children pasta. Through Caterina’s Club, he has done so each day since and today feeds some 3,500 children daily. More than 2 million meals have been served so far and the need keeps growing. His influence has extended far beyond Southern California to include Chicago, New York, Texas, Mexico, and Italy. He has extended his mission by moving these “motel families” into permanent housing. While many of the families are working and able to pay the monthly rent for their own apartments, they cannot afford the first, last and security deposit required at the onset. He has already helped hundreds of families escape motel living by finding them apartments of their own and their lives have improved considerably.

His newest endeavor is working with the Anaheim School District to establish the Hospitality Program, which seeks to divert high school students from gangs and other bad influences by teaching them about the food, hospitality and service industries. The students receive hands-on experience and even paid internships in these areas so that they can explore careers in the field following graduation.

For his humanitarian work, Serato has earned international publicity including profiles in People Magazine, “CBS Evening News” and newspapers and magazines all over the world. Among his many honors is being named a CNN Hero, being knighted by the Italian government, receiving a papal blessing from Pope Francis, getting a humanitarian award on the steps of the U.S. Capitol, being honored by the Good News Foundation and receiving numerous proclamations, Man of the Year awards and other forms of recognition—all of which he accepts to generate public awareness of the needs of our most vulnerable population—our children. For more information, visit www.caterinasclub.org

Products In This Article

Get the latest updates on new products and upcoming sales